Darci Stone is the author of “Mara’s Shadow” and winner of the Writers of the Future Contest 2018 grand prize Golden Pen Award. 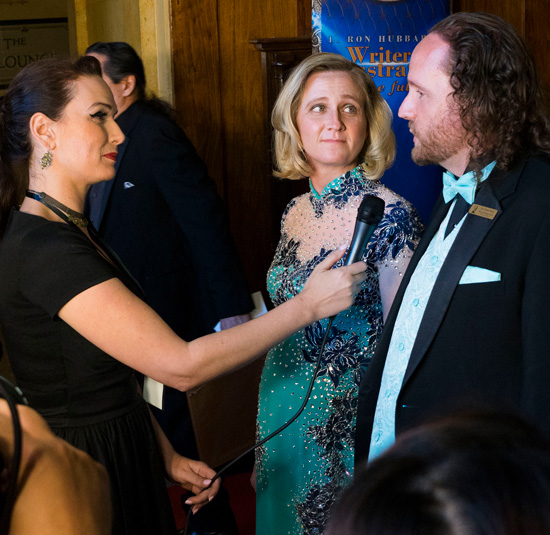 Darci Stone and Eric James Stone being interviewed at the 2018 Writers of the Future Awards Event.

Award-winning authors are no stranger in her household as she is married to 2005 Writers of the Future Contest and Nebula award winner Eric James Stone. It was Eric who introduced her to the world of writing and encouraged her to enter the Contest. As Darci confesses, “I do want to thank my husband for badgering me, repeatedly, to submit my story. If I remember correctly, he was the one that actually uploaded the file and hit send.”

Being married to a published and award-winning author certainly helps if you want to be a writer, but it’s not feasible for most aspiring authors.

In that regard, L. Ron Hubbard’s Writers and Illustrators of the Future Contests are unique–all entries are anonymous and so ethnicity, color and gender play no part in the judge’s selection of who wins. There is only one criterion for getting a chance at winning and, as Darci discovered, you have to hit send.

Since learning last year that she was a finalist with a chance at winning the grand prize, Darci has been vocal in her encouragement of others, especially women, to pursue their goals. To the audience and viewers watching the awards ceremony, she stated simply, “I want to encourage all women listening tonight to pursue your own dreams. Never limit yourself because of other people’s expectations.”

“Mara’s Shadow” was Darci’s first submission to the Contest, and the only story she has written. As her husband put it, “As a writer, she’s never received a reject.” On that count, Darci admits, “If you read the first draft of my story you would be shocked that I’m a winner because it was terrible. And I’m not just saying that to be modest. It was really bad.” She went on to thank everyone who read her story and gave her the feedback and insight she used to make it a better story. The rest is history.

In her story, which takes place in Vietnam, Darci pulled elements from her own life to weave into the plot. That includes a female scientist as the protagonist and a moth as the villain of the piece. It’s a rather odd combination but not without reason as she explains in this interview.

To read Darci’s story and enter the diverse new worlds of these award-winning short stories, get your copy of L. Ron Hubbard Presents Writers of the Future Volume 34.