I think the answer is pretty straight-forward. A writer writes; an author publishes for a paying audience. So while every author is a writer, not every writer has the stuff to be an author.

How do you make the transition (other than the obvious: selling)? You develop and internalize the tools needed to produce material that satisfies both your own inner critic and a publisher’s needs—and use those tools to deliver on-time and according to request (word count, genre, subject matter).

Things to Write About

For example, when you see a call for submissions for an anthology of urban fantasy with a deadline in two days, do yourself a favor and figure out what urban fantasy is. I had no idea, so I wrote a nice bit of magic realism involving a miniature horse and a WW1 veteran (based on a real person), then set it in Berlin. Sent it off the next morning so it would arrive before the deadline. Got a lovely rejection that same day from an obviously confused editor who said, “It’s urban … and it’s fantasy. But it’s not urban fantasy. Good luck selling this elsewhere.”

Oops. I hit the deadline just fine, but I didn’t understand the genre or its tropes. Writer, not author.

Sometimes you don’t have time to wait for the muse to provide inspiration for things to write about. So you learn to make anything into a story. I once used an “Empty every night” label on a trash can as a fantasy writing prompt to write a story that I’ve now sold three times by playing the question game.

How to Start a Story

Empty every night… Empty what? Stories are about characters so it should be a character who is emptied. Emptied of what? Thoughts? Toxins? Hope? Memories. His memories are edited each night. Is he a robot or a person? Editing a person’s memory is both harder and more horrific, so it’s gotta be a person. Who does it? Government agents? Caring family? Himself? I like the idea that he edits his own memories, but I think it’s more horrific if it’s done to him by someone he trusts. Aliens? Yes. Aliens whose only desire is to help, so it hurts them to do this cruel but necessary thing to him.

And so on until you’ve answered enough questions to generate a plot with try/fail cycles, character jeopardy, and meaningful consequences. What to write about—all from a trash can label.

Sometimes when working out how to start a story you start with an idea. I recently sold a piece based on the question, “What makes someone beautiful?” Sometimes you start with a colorful character as I did with the horse/veteran story above. Or an image, as I did with a microchip advertisement that featured a chrome-clad warrior woman standing atop a silicon wafer—who I immediately recognized as The Electric Valkyrie.

So go out into the world and experience new things to generate new images, characters, and questions that you can then transform into a story. You can literally turn anything into a story by playing the question game and exercising a little creative imagination.

In fact, this post is based on exactly that. I wrote an odd, quirky little experimental story that ended up winning a prize in the Writers of the Future Contest. (Read “Purposes Made for Alien Minds” in L. Ron Hubbard Presents Writers of the Future Volume 31.) At the award ceremony, I noticed that the announcer always referred to the winners as either author or artist, and that set me to wondering why. And of course, I already knew the answer—an answer that had been reinforced time and again during the week-long workshop before the awards.

Authors are those who can turn anything into a story that’s well-written and interesting enough to be published. All you have to do is work hard and compellingly answer a few simple questions. 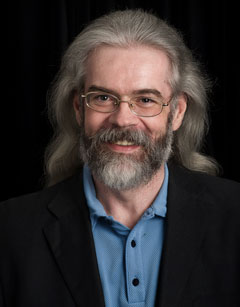 Scott R. Parkin is an author, essayist, podcaster, and pop critic who’s sold more than fifty short stories to a wide variety of markets from literary-academic to romance to military SF. He is also a proud winner in the L. Ron Hubbard Writers of the Future Contest.

How To Start Writing