Craig Elliott, production designer, a master of fine art, animator for live-action films, a concept artist, and all-around master of his craft, is enthusiastically welcomed as a judge for the Illustrators of the Future Contest.

Elliott was a featured workshop instructor for the 2019 Illustrators of the Future winners in Los Angeles. It was clear that he would become a permanent installation to the annual workshops with his sound advice to the new artists and care in helping launch their careers.

In his own words, “Sometimes a little bit of just the right kind of advice from an experienced mentor can make the world of difference to someone starting on their art career.” 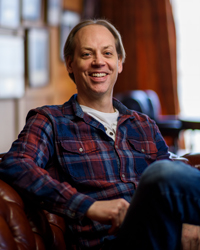 Craig Elliott in Writers & Illustrators of the Future lounge

Craig Elliott is an artist based in Los Angeles, California and is especially known for his exceptional ability with the human figure and creative composition. His work has evolved into a unique vision informing and influencing fine art, print, animation, and commercial worlds. In the animation industry, he has worked primarily for Disney and Dreamworks, designing their animated films such as Hercules, Mulan, The Emperor’s New Groove, Treasure Planet, Shark Tale, Flushed Away, Bee Movie, Enchanted, Monsters vs. Aliens, and The Princess and the Frog as well as other upcoming features.

The Writers and Illustrators of the Future Award is the genre’s most prestigious award of its kind and has now become the largest, most successful, and demonstrably most influential vehicle for budding creative talent in the world of contemporary fiction. Since inception, the Writers and Illustrators of the Future Contests have produced 35 anthology volumes and awarded nearly $1 Million cumulatively in cash prizes and royalties.

To find out more about Craig, go to craigelliottgallery.com

The Future of Hollywood Success Rests in the Hands of the Writers of the Fu...