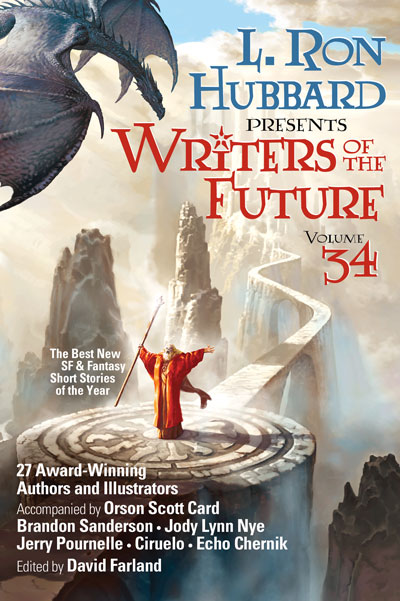 This year’s release of L. Ron Hubbard Presents Writers of the Future Volume 34 debuts 12 new illustrators with their own style of creativity and diversity in science fiction and fantasy art.

This latest anthology in the Writers of the Future series offers a full spectrum of artistic style. Publishers Weekly summed it up in their starred review:

“The 34th collection of Finalists for the Writers of the Future competition features expertly crafted and edited stories and art, running the gamut from humorous to bone-chilling.”

Submissions for the Illustrators of the Future Contest have come in from over 170 countries. And here is a glimpse of the new artists you will meet in volume 34.

Illustrator of “A Smokeless and Scorching Fire”

Kyna Tek was this year’s annual Golden Brush Award winner and commented after the event, “When I saw everyone else’s illustrations in this contest I never imagined I had a chance. Thank you for this moment. I’m never going to forget it. I will cherish it forever.”

Kyna was born in 1980 at an unnamed refugee camp in Thailand along the Cambodia and Thailand border. His family eventually immigrated to Tempe, Arizona where he grew up a typical ’80s kid playing video games, watching movies, and reading comics.

It wasn’t until he attended college that he discovered his passion for drawing and painting. He immersed himself in studies of the arts and his skills grew exponentially.

After graduating from college he has continued honing his craft and discovering where he fits in the illustration world. He enjoys pursuing his ever-continuing education through self-study and creating inspired illustrations in the fantasy and science fiction genre.

Anthony Moravian is an illustrator who uses classical techniques to create realistic fantasy themes. He specializes in charcoal drawings and oil paintings. Anthony was born and raised in Brooklyn, New York and began drawing at the age of three.

Ever since Anthony was a child, he would draw from the collection of comics he had in his basement. He admired the creativity in fantasy and science fiction stories, and he works to capture some of their creativity in his paintings. He really began taking an interest in drawing fantasy art when he began playing fantasy-based video games.

As a result, he began to work to capture some qualities that were often featured in classical realistic paintings while maintaining his interest in fantasy concepts. He currently lives and works in New York as a freelance illustrator.

Anthony had the honor of being an Illustrator Contest published finalist for Writers of the Future volume 33, and his art can be seen in that volume as well as volume 34.

Illustrator of “Odd and Ugly”

Reyna Nicole Rochin was born December 30, 1990 in the suburbs of Los Angeles, California. Like most artists, she had crayons and paper in her hands since the day she could.

Growing up, there weren’t many other artists around her. She spent her childhood playing in the backyard, taking trips to the California beaches, and simply just trying to get through life in good grades.

Out of high school, she received a scholarship to play volleyball at San Francisco State University, which is where life took her next. With her sports background and a degree in Fine Arts emphasizing in drawing and painting, she had no clue what to do—so she took up a career in personal training.

A few years later, painting still captured her interests in her off hours. She eventually made the decision to return to school and was accepted to the Savannah College of Art & Design for MFA in Illustration.

Today, she spends her time working hard at school in Atlanta, power lifting and reading when she gets the chance.

Adar Darnov was born in 1993 in Teaneck, New Jersey. His family moved to Mt. Kisco, New York where growing up he always engaged in creative activities. Just like many other creative boys, he built cities out of toys and drew his favorite TV characters.

He continued on this path taking many art classes eventually enrolling for his undergraduate degree in illustration at School of Visual Arts in New York City. After visiting with some childhood friends who were playing Dungeons & Dragons and Magic: The Gathering, Adar remembered how much he loved fantasy art when he was younger. This caused him to pursue fantasy illustration in earnest, especially leaning toward a realistic style.

Illustrator of “A Bitter Thing”

Jazmen Richardson was born in 1998 in Auburn, New York. Living in the middle of nowhere most her life, her imagination was able to roam through the fields surrounding her home.

Jazmen has been drawing and creating stories since she could walk and hold a pencil. Whether they made sense to the viewer or not at the time, each story’s characters were as real to her as another family member.

Though her family is full of creative hearts, she is the first to pursue it as a career.

After graduating a year early from high school to pursue an artistic mentorship, Jazmen was able to attend Ringling College of Art and Design of Sarasota, Florida to study illustration and the business of art and design.

She has been working in digital art for two years now, and is moving toward a specialty in oil painting.

Jazmen concurrently works convention-like events striving to make connections with other artists and improve herself and her work. She may be quiet, but there is nothing more gratifying than meeting new faces and experiencing stories other than her own.

Illustrator of “The Howler on the Sales Floor”

Sidney Lugo was born in 1994 in Guarico, Venezuela. “Sid” to her friends, she grew up most of her life in Caracas, Venezuela and moved to Boston at age nineteen to study Interactive Design.

Her childhood memories serve as inspiration for many of her drawings. She developed an interest in fantasy and sci-fi from a young age.

Sid spent a lot of time looking at French comic books and stories, especially those from the comic anthology Métal Hurlant. These kinds of surreal sci-fi and fantasy stories stimulated her imagination and inspired her path as an artist.

Outside of her studies, she continued to learn and pursue her interest for art. She continues to learn and improve her skills in order to work as a storyboard artist and work on her own comic book.

Sid is currently a graphic design working as a freelancer for private clients.

Growing up in the forests of southern Ohio, Quintin was transfixed by stories of fantasy and science fiction from early childhood. Starting out primarily as a digital artist he made the switch to oil painting after attending Illuxcon in 2016 and has been captivated by traditional mediums ever since.

Currently he is hard at work creating images for his illustrated novel set in a post-apocalyptic American West, populated by fantasy creatures, dinosaurs and other prehistoric beasts.

Quintin received a BFA from Shawnee State University in 2017 and currently studies at the Columbus College of Art and Design in pursuit of an MFA.

Illustrator of “Flee, My Pretty One”

Alana Fletcher was born in 1996 in Middletown, NY. She was introduced to the arts at a young age while growing up in Michigan. She took figure-drawing classes at the Kalamazoo Institute of Arts, and continued to develop her work within online communities. She began painting with a mouse in Photoshop, but eventually obtained a Wacom tablet to continue to expand her capabilities.

Alana is now attending Ferris State University for Game Design and Digital Animation in Grand Rapids. She concurrently works as a freelance illustrator and concept artist.

Illustrator of “All Light and Darkness”

Duncan Halleck is an illustrator and concept artist working in the entertainment industry and specializing in the genres of science fiction and fantasy. He began his journey as an artist at a young age, copying cartoon characters and superheroes from books he found around the house and spending hours studying movie stills from The Lord of the Rings. As he grew older, he developed a deep passion for science fiction and fantasy literature and devoured the works of authors such as Ray Bradbury, Ian M. Banks, and J. R. R. Tolkien. Always an avid doodler, his love for the arts never ceased throughout his school career, his notebooks attesting to his ceaseless drive to create and explore new ideas.

After graduating high school, several yearlong stints in cities across the US and a close brush with architecture school, Duncan settled down in Belgium with his wife and aged English Pointer.

Shortly after the birth of his first daughter and a time as a landscape painter, Duncan decided to pursue a full-time career in digital art and illustration and began in earnest to study the fundamentals of art and improve his skills as an image-maker. His passion for the fantastic carries through to this day and finds an outlet in the alien landscapes and future metropoli that populate his hard drive. Currently, he freelances for small publishers and developers out of Brussels, where he can be found hiding from the rain with a cup of tea, a good book, and a photon blaster.

Illustrator of “The Face in the Box”

Bruce Brenneise grew up in the countryside by Lake Michigan; nature and fantasy were two of his main interests from childhood. He continued to not-so-secretly focus on magic, monsters, and myths while studying scientific illustration at the University of Michigan. Pursuit of diverse environments and experiences led him around the world in search of artistic inspiration: a field sketching trip to Southern Africa, months amid ancient ruins of Anatolia, not to mention six years working and traveling throughout China and other parts of East Asia. The landscapes he has explored and the vistas one can only find in fiction are at the heart of Bruce’s current work as an illustrator and independent artist.

He currently lives with his wife and carnivorous plants in Seattle.

Illustrator of “What Lies Beneath”

Maksym “Max” Polishchuk was born in 1999 in Lviv, an ancient Ukrainian city located at the crossroads of Western and Eastern Europe. Lviv, with its diverse culture and rich history, ultimately became one of the primary sources of Maksym’s inspiration, who was always fascinated by the history concealed behind each ancient structure.

Such fascination with history, coupled with the discovery of texts of Tolkien and J. K. Rowling, is what ultimately ignited Maksym’s interest in illustration. Art was the only way of transforming the stories and worlds he saw in his imagination into something more tangible. In order to help him achieve his dreams, his mother sent him to an art studio, which he attended almost daily over the span of six years, and which helped him nurture his talents and skills.

Maksym moved to the US just before his freshman year of high school. Even though his world was transformed completely, the one thing that remained constant was art. Today, Maksym studies political science and international relations at Loyola University Chicago in hopes of creating a better world that is not limited solely by the boundaries of the canvas.

Illustrator of “The Minarets of An-Zabat”

Brenda Rodriguez was born in Mexico, but moved to the US before her first birthday and has been here ever since. She started drawing as a child and has never stopped loving it. Brenda attributes her passion for character creation to her interest in video games. Her favorites include The Legend of Zelda, Kingdom Hearts, and Final Fantasy. She recalls being inspired by them at a young age as a child, and on throughout her life thereafter. To this day, she can thank Nintendo and Square Enix for fueling her aspiration of getting into the entertainment industry as a character artist.

Brenda graduated in spring of 2017 with a degree in Computer Graphics Technology from Indiana University–Purdue University Indianapolis. She is now working as a freelance artist and polishing her portfolio to officially break into the industry.

Never Give Up!
Scroll to top