I know a truth. We are all going to fall. Many times. Perhaps I know this truth better than some because I was born with a disconnected spine and extreme in-toed feet—my left and right foot pointed directly at one another. I could not walk without falling. Kids laughed at me. My knees were not knees, they were horrible black and brown scabs. But I also know a secret. You can lay on the sidewalk, or you can get back up and start walking again, bloody knees and all. The choice is yours.

The same is true with writing. We are going to fall. Many times. We are going to think we’ve got it, that this time we can keep it up, only to trip and drop flat on our face and wonder what in the world just happened. It’s inevitable. When one is learning to walk, it is an absolute. When one is learning to write, it is also an absolute. What makes us soldier on? I suppose a core belief that we’d rather be walking than lying in the dirt. There is also that innate sense that we were born to write, and if we can just get our balance and catch our stride, we know in our heart of hearts we have the potential to soar like the wind.

But first, we must learn to walk. As in life, so in writing.

In life, I learned to walk at six years of age, when I finally had a successful surgery and corrective casts that turned my feet back out. My back, doctors left alone, so I have always been disabled, but that hasn’t stopped me from walking, running, even dancing, and yes, I still fall at times, but after the pain subsides, I always get back up.

As in writing, I have always known that I’m a writer. It’s in my blood. At fifteen I wrote an SF story that was a winner in Scholastic Inc.’s national writing contest. The editor at Science World, circulation 500,000 copies per issue, bought and published it in 1978. My first pro sale. I won so many contests after that, I was certain I was on the path to a professional writing career.

And then I fell. Living in a violent household, I escaped and got placed in a foster home. I didn’t care if I lived or died, and took many risks with my life. While at college I ended up in a hospital, my biggest fall of all, and came face to face with what falling would cost me. Saving my life required a change of life. I had to burn my bridges behind me. For me, that meant extreme measures, and I signed away my full scholarship, left bad friends … and I stopped writing.

It wasn’t until 1994 that I took up writing again. The Nebula Awards had come to Eugene, Oregon, and my wife encouraged me to go. When I signed up, I met Dean Wesley Smith. He noted I was from town and asked if I had anything published. As I listed some credits, his eyes lit up. “You’re a professionally published writer!” For the rest of the convention, he introduced me to everyone, and I mean EVERYONE, like this: “Have you met Moon? He’s a published writer!” I was beyond embarrassed, but by the end, I got the point. It was no small thing to achieve a professional sale, I was indeed a writer, and I should stand back up and walk the path again.

Dean introduced me to the local writer’s group, Wordos. They introduced me to Writers of the Future, and I started submitting and collecting certificates. My next pro sale was in Star Trek: Strange New Worlds II. From there, I queried the editor at Pocket Books, and he said I could submit my Trek novel. When literary agent Donald Maass represented me on it, I was certain my career as a novelist had begun. This wasn’t walking, this was running with the bulls! 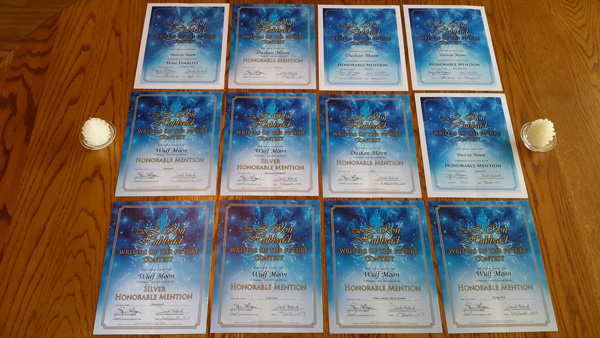 And then I fell. The novel was rejected. At the same time, my wife became seriously ill. It took years to get her back on her feet, and when she was finally safe, we moved to escape the memory of that ordeal. In spite of it all, I kept submitting to Writers of the Future as able, and got an invite to attend the awards gala when it was held in Seattle. At the after party, I sat with Kevin J. Anderson, and he asked about my writing. I told him about the certificates. “They don’t hand those things out lightly,” he said, looking me straight in the eye. “This is a huge contest. That you have that many says a lot. It’s a Big Deal. Keep writing, Moon.”

And so I have. Through all the subsequent trials–as my wife’s health tanked again when she was diagnosed with cancer, as we lost our business and home in the recession, as we brought her through the treatments and got her stabilized—I would write as I was able. And I made a commitment a few years ago that in spite of the adversities, I would do my best to enter WotF every quarter. Out of the thirteen times I’ve entered with David Farland as coordinating judge, those twelve certificates you see above—from HM to Semifinalist—are the result. I have many more, but these are the ones with Dave. They aren’t wins, alas. But each one says I have not given up, and whether I win this contest or not, I am walking the path.

I am grateful for this contest. It has helped many of my friends jump start their writing careers. And the honorary certificates and critiques you get from the contest coordinators validate your writing and help you improve. In my case, I know there is no way I can have so many consistent near misses, over so many years, without my writing being of professional caliber. That’s comforting. So, I lower my head, lean into the wind, and keep on walking. Virtually everyone else has had to walk this path to achieve success (even my favorite author, Frank Herbert, with the most brilliant book of the 20th Century, Dune), so why should I expect anything different? A good personal rejection, a contest certificate, a judge that writes us an encouraging note–these are signposts along the path that we shall reach our destination if we stay the course.

I know a truth: The difference between success and failure is getting up one more time than you have fallen. 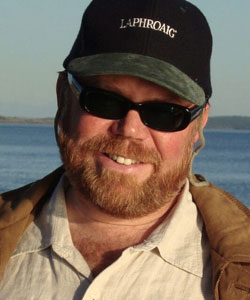 Wulf Moon feasted on fantasy as a young child when he lived with his Chippewa grandmother. He begged stories from her every night and usually got his wish—fireside tales that fired his imagination. If Moon had a time machine, those are the days he would go back to. Since he doesn’t have a time machine, he tells stories. Learn more at driftweave.com.