From a love of creating stories to setting goals, first payment, first publication, winning Writers of the Future, and making my way up the ladder to professional author.

In the beginning, the earth was without form and void… Too far back? Hmm, okay. How about my beginnings instead?

I’ve been making up stories for as long as I can remember, since before I could actually write. Recently my friend Mike—whom I’ve known since we were like five years old—reminded me that I was the one who always made up the back story to games we played as kids. When my friends would say “Let’s play war!” I was the one who said “Yeah, but why are these two sides fighting? Maybe they share a border and one has something the other wants.”

I got a lot of blank stares as a child.

For all of my love of creating stories, I didn’t actually start writing them down until my last year or two of high school. I had a wonderful art and drama teacher who read my stuff and was the first person outside of my family to tell me it was good. He gave me an outlet for that creativity and those drama classes were a place to see my stories come to life. It was enough to get the ball rolling.

In college, while enrolled in theatre, I found other places to hone my writing skills and get feedback. Another encouraging teacher there allowed me to submit stories for his class instead of the essays everyone else was handing in.

After that…? Well, not much. I always had a story sort of on the go, and I was sort of writing a novel, but mostly I was just saying I was a writer while making my way through day to day life. What I realize now was that I was missing a clear direction on what to do next. Without that, I didn’t know how to go from being a dabbler to becoming a real author. I muddled through, reading books on writing and hoping to find the secret that would make everything fall into place.

And so, life went on. I worked at jobs which did little to excite me, other than allowing me to pay the bills. All the while I told myself, and anyone else who would listen, that I was in fact a writer.

Then, something happened which turned my whole life upside down: My first son was born. Followed a short time later by a second one. It completely changed my way of thinking and what I considered important. I knew I wanted my boys to be proud of me, that I wanted them going to school, and telling their friends “My dad is a writer” rather than “My dad does some boring office job.” Better still, I wanted them to see me going after my dream and doing everything in my power to make it come true.

I was determined to be an example, rather than a cautionary tale.

I’d been reading a lot of books on positive mental attitude, on setting goals, and on achieving success. Taking some of those principals I applied it to my writing. I knew the long term goal of becoming a full-time writer, but needed a bunch of mini-goals between where I was and that goal: first publication, first payment for a story, first professional publication, first award. All of these mini-goals were rungs up a ladder to where I aimed to be.

To get there I needed to become a better writer though. I took a local continuing education course on writing which helped fill in some of the blanks in my knowledge on how to craft a story, but the real breakthrough came in the second level to this course.

Level two dealt with critiquing groups, showing our work to others, and sending stories to publishers for consideration.

I signed up for that second level course, knowing it was the next necessary step for me, but the idea of letting people I didn’t know read my stuff was intimidating… to be honest it was terrifying. On my way to that first class, I almost turned around and went back home. At one stop sign, I sat staring at the folder of stories on the passenger seat. Who would really blame me if I didn’t go? Who would even know, other than myself? If I did return home though that would be the end. The death of the writing dream. This class was the next vital step. All those PMA (positive mental attitude) books told me that facing a scary step meant I was going in the right direction.

I went to the class.

That first night we each brought copies of a story to share with our classmates. Over the following week, we would read each story and jot down our insights and impressions. I wish I could say I remember some of the other student’s stories from that class. What I do remember is that the teacher really enjoyed mine, and wanted me to submit it for a local mystery writers contest.

This story was “‘Til Death” (you can read it on my website) and dealt with a couple who were going through some mental fantasies of killing each other off. There’s a bit of a twist at the end and it’s a fun story to read (though I may be biased). It was another scary step but I submitted that story and, to my complete and utter amazement, won first place in that contest. It was the first time my writing made me actual money.

This one success encouraged the desire to succeed, and it took me another rung up that ladder toward my ultimate goal of being a fulltime writer.

After that, I started writing every day, usually very early in the morning before heading off to work. I always kept a notebook with me to write ideas down at lunch, or to work on whatever story was currently in progress. Every completed story was now being sent out to publishers for consideration. If it got a rejection that was no big deal, just part of the process, and that story would be sent on to the next magazine or anthology. I started a spreadsheet to keep track of where the stories currently were, when I could expect a response, and who had already seen and rejected a story so I could avoid sending them the same story twice.

Eventually, success started trickling in, stories were purchased. “BB and the Pigs” sold first, then “Dead by Dawn” (both also on my website to read). Those first few sales didn’t get much more than contributor copies, but it was another rung up the ladder, another goal reached.

Things were starting to happen for me. I was focused and committed. Stories were being accepted. I tracked my daily word count and joined a writing group where we helped each other improve. I freed up time to write by giving up things that just didn’t need my attention, such as watching television and playing video games.

More stories sold, though that first professional sale still eluded me. It was just a matter of time though. I knew it and trusted in the process, kept submitting completed storied, and working on the next one. 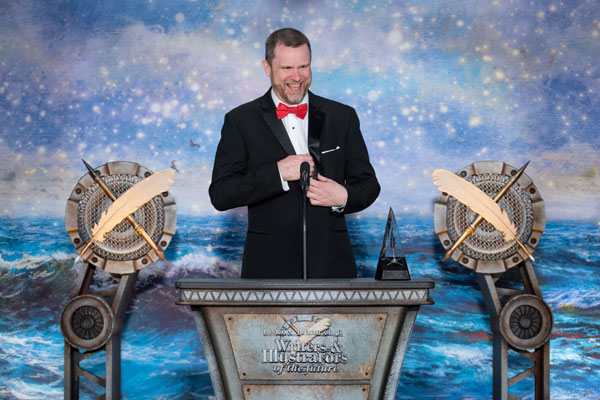 Then one day Joni from Writers of the Future called me. Did I remember submitting a story? Yes, I did (though I had to check my spreadsheet to see which one). She was happy to tell me that the story “Damned Voyage” had won third place in the fourth quarter for the year and I was going to be published in L. Ron Hubbard Presents Writers of the Future Volume 35. I was stunned. Honestly, Joni said a lot of other things but I was still trying to wrap my mind around the win.

I traveled to Los Angeles for a week of teaching from incredible writers I never dreamed I would meet, and they were telling me how good my story was. Surreal. I knew how Alice felt when she fell down that rabbit hole. The experience also gave me a new goal: to one day return to L.A. and speak before that year’s winners, to encourage them and tell them how great their stories are. To pay it forward. 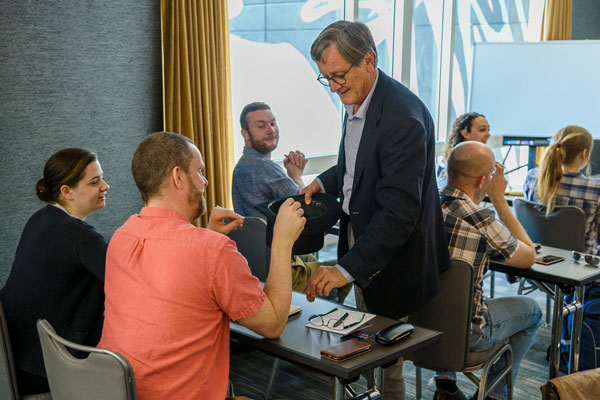 John Haas in Writers of the Future workshop

There is a quote by Lao Tzu I’ve always thought sounded cool: “The journey of a thousand miles begins with one step.” I’ve heard it countless times in my life, but one day it occurred to me just how those words applied to my life and my writing. Building a writing career is certainly a journey of a thousand miles and looking at the entire journey would just be paralyzing, daunting, intimidating, but if I just focus on this next step, that next milestone, I can do it. And one day I will look up from all of those steps to find that thousand-mile goal is suddenly within my reach. 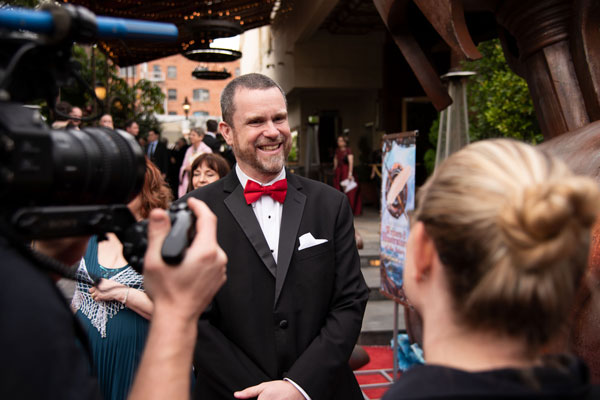 John Haas on red carpet at Writers of the Future gala

What happens once I make it to that goal?

Easy. I pick a spot on the horizon and make a new thousand-mile goal. 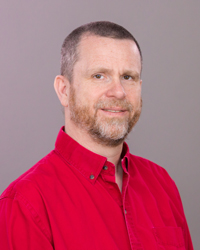 John Haas is a Canadian author, born and raised in Montreal before moving to Calgary where he lived for twelve wonderful years. Now he lives in Canada’s capital, Ottawa, but still misses seeing those Rocky Mountains in the distance.

John has been writing for most of his life but only became serious about being published in the last decade or so. In that time he has had twenty short stories published in various excellent publications, including taking third place in the 4th quarter of Writers of the Future for 2018. He has also seen his first three novels published, The Reluctant Barbarian (2017), The Wayward Spider (2019) and The Unavoidable Quests (2020) all by Renaissance Press.

Currently he is working on the novel prequel to his WotF story which will be titled Cults of Death and Madness.

His goal is to become a full time writer (rich and famous would be nice too but not the main goal).

He lives with his two wonderful sons who continue to give him lots of motivation.

For more information, please see his website at: http://johnhaas.weebly.com