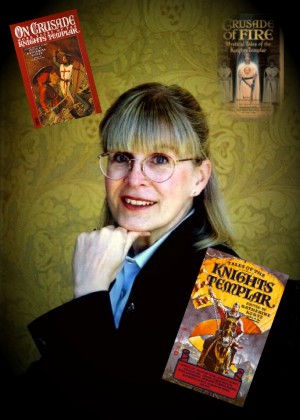 Historical fantasy author of the Deryni series, Katherine Kurtz, is the newest judge to join the ranks of the internationally-acclaimed L. Ron Hubbard Writers of the Future Contest, now in its 35th year.

Kurtz most notable works include the Deryni series, the Templar series, and the Adept series.

“Katherine Kurtz has written some of the finest fantasies of our time,” said longtime judge and bestselling author Tim Powers.

She sold her first novel, Deryni Rising to Ballantine Books and wrote her second two novels, Deryni Checkmate, and High Deryni while completing her MA in medieval English history at UCLA and writing instructional materials for the Los Angeles Police Department. She created her own sub-genres of “historical fantasy” and “crypto-history.”

She created Deryni Archives: The Magazine, which contains stories, articles, and artwork by fans, of which she edited the first several issues.

Kurtz will now lend her talents in discovering new authors in one of the leading writing contests in the world. “I always try to help up and coming writers and am delighted to be able to judge in the L. Ron Hubbard Writers of the Future Contest.”

The Writers of the Future Contest was initiated by L. Ron Hubbard in 1983 to provide a means for aspiring writers to get that much-needed break.

The intensive mentoring process has proven very successful. The nearly 400 past winners of the Writing Contest have published 838 novels and over 4,000 short stories. They have produced 27 New York Times bestsellers and their works have sold over 50 million copies.

For more information or to enter the contest, go to writersofthefuture.com.

Writers of the Future Welcomes Bestselling Author Katherine Kurtz as its Newest...
Scroll to top