Joe Montaldo, CEO of United Public Radio Network, presented a plaque recognizing L. Ron Hubbard as “one of our nation’s most prolific and acclaimed authors of the 20th century, beginning from his early years as a legendary writer in the Golden Age of Pulp Fiction on through to his late years when he completed and published his final writings.”

The presentation was made at the UPRN studio in New Orleans by Montaldo and accepted by John Goodwin, President Galaxy Press, publisher of the fiction works of L. Ron Hubbard. The plaque was dated March 13, Mr. Hubbard’s birthday.

Joe Montaldo’s familiarity with L. Ron Hubbard’s fiction works dates to 2016 when international bestselling author and regular guest, Jim Marrs, frequently discussed “Battlefield Earth” among the several interview topics, whether political, paranormal, or popular conspiracy theories. Over time, Montaldo interviewed other authors who had either won or entered the L. Ron Hubbard Writers of the Future Contest and learned about this aspect of his legacy. With John and Emily Goodwin on as regular guests over the past two years, Montaldo has additionally gotten familiar with Mr. Hubbard’s remaining fiction works. 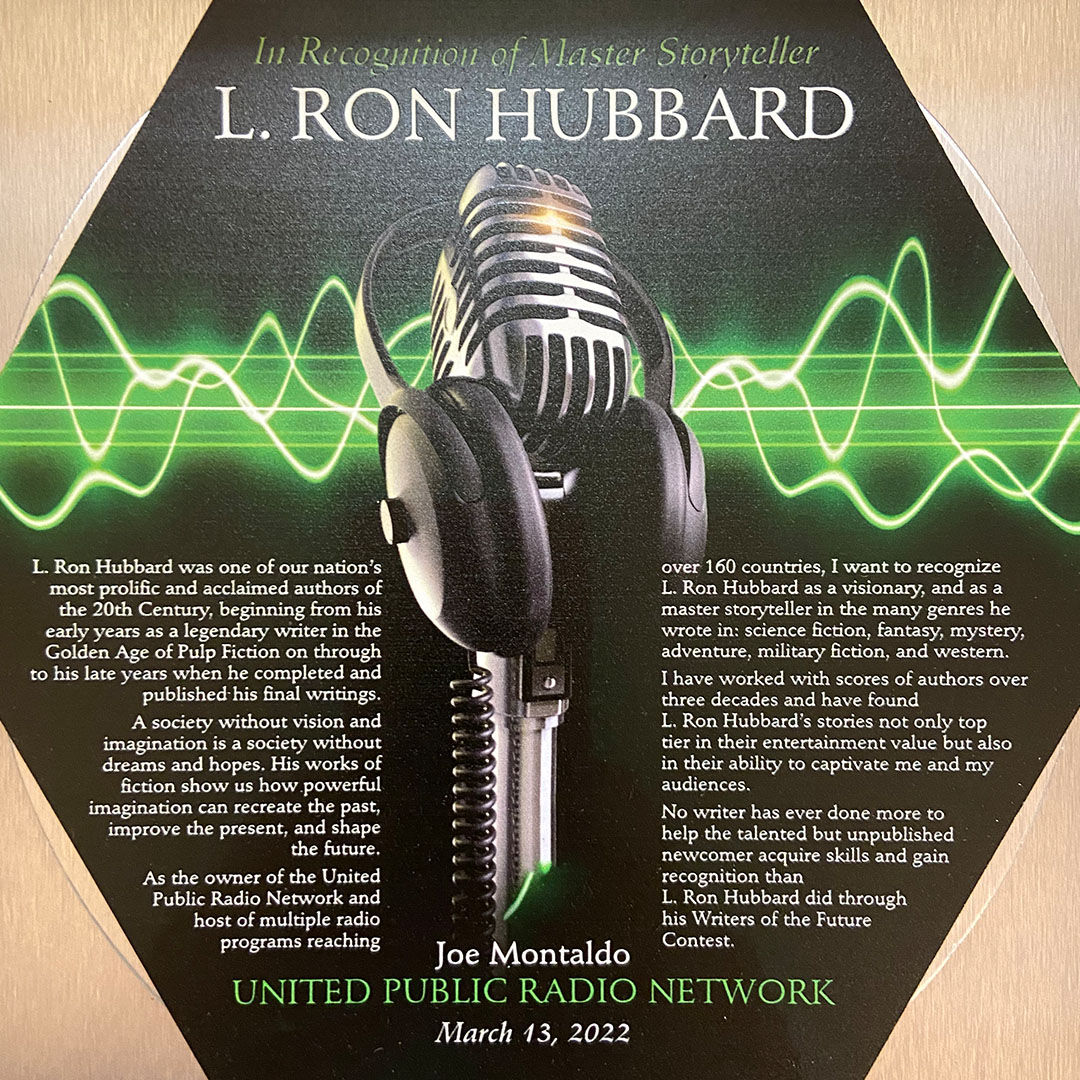 “L. Ron Hubbard was one of our nation’s most prolific and acclaimed authors of the 20th century, beginning from his early years as a legendary writer in the Golden Age of Pulp Fiction on through to his late years when he completed and published his final writings. A society without vision and imagination is a society without dreams and hopes. His works of fiction show us how powerful imagination can recreate the past, improve the present, and shape the future. As the owner of the United Public Radio Network and host of multiple radio programs reaching over 160 countries, I want to recognize L. Ron Hubbard as a visionary and as a master storyteller in the many genres he wrote in: science fiction, fantasy, mystery, adventure, military fiction, and western.

“I have worked with scores of authors over three decades and have found L. Ron Hubbard’s stories not only top tier in their entertainment value but also in their ability to captivate me and my audiences.

“No writer has ever done more to help the talented but unpublished newcomer acquire skills and gain recognition than L. Ron Hubbard did through his Writers of the Future Contest.”

Writers and Illustrators of the Future Announces its 38th Annual Achievement...
Scroll to top