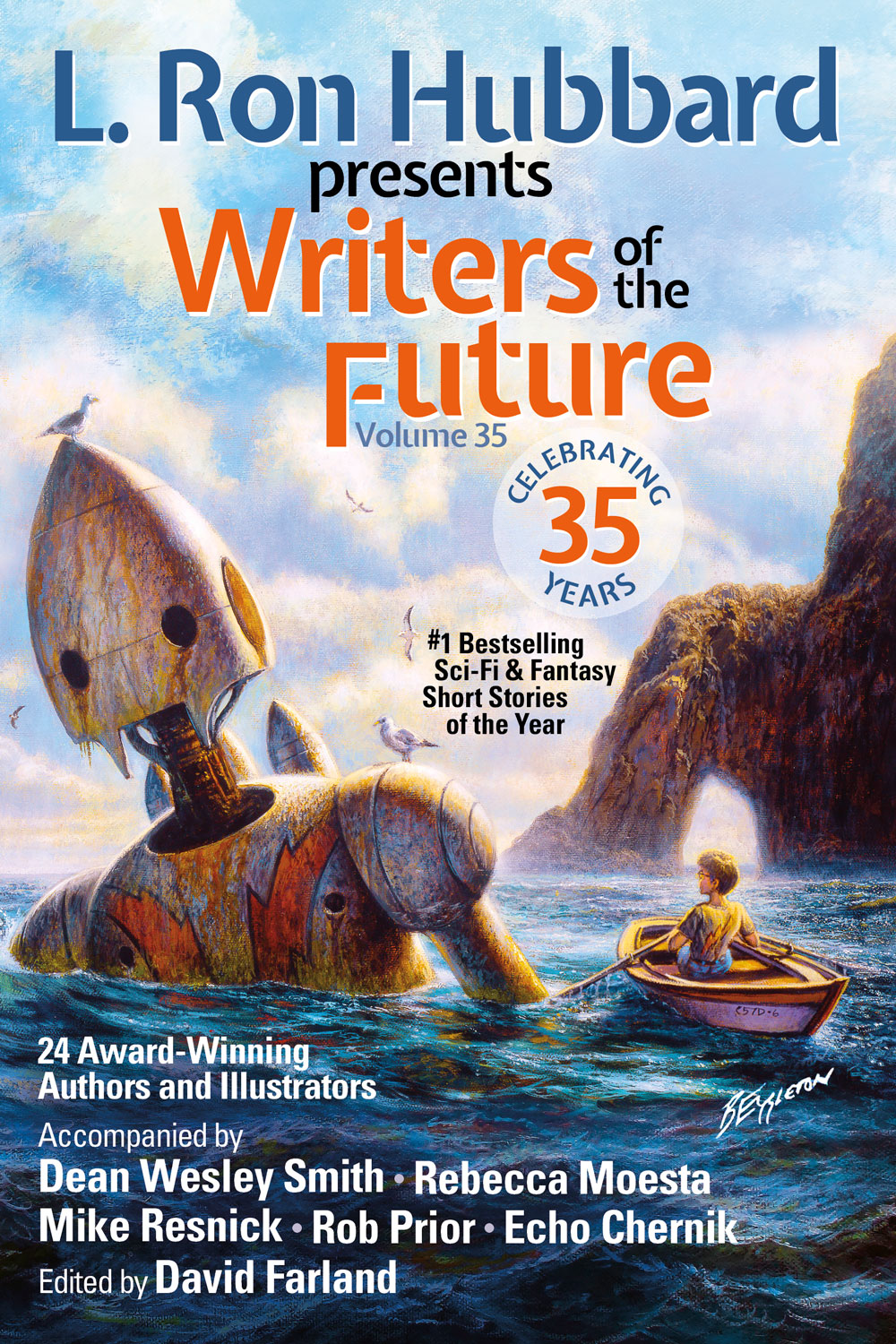 The painting named “One of Our Robots Is Missing” was transformed into a book cover by Bob Eggleton combining with a second painting he created. He stated that “it was fun to revisit a painting I did 12 years ago and expand on it. It was a wonderful job melding two paintings together to make a wholly new one.”

The upcoming volume 35 also contains a short story by award-winning science fiction author and Writers of the Future Contest judge Dean Wesley Smith, entitled “Lost Robot: A Sky Tate Mystery Story” which was inspired by Eggleton’s cover art. He told us, “I have been a fan of Bob Eggleton’s wonderful art since he did the cover for the very first Aboriginal SF Magazine for a story my wife wrote. We have that original and numbers of other Eggleton original paintings on our walls right now. So when I was offered the chance to write a story for Bob’s wonderful cover for Writers of the Future Volume 35, I jumped at the chance. And then, even more fun, the art hit perfectly into one of my ongoing superhero series starring Poker Boy and superhero detective Sky Tate. Having Sky solve the mystery of Bob’s “Lost Robot” turned out to be great fun.”

Bob Eggleton is a founding judge, meaning he has been with us the entire 30 years of the Illustrators of the Future Contest’s history having been brought on board by the original Contest coordinating judge, Frank Kelly Freas. About the contest, Eggleton says, “L. Ron Hubbard ignited the spark of imagination, which in the minds of these new artists has become ablaze.”

Writers of the Future was a contest initiated by L. Ron Hubbard in 1983 as a means of providing a helping hand to aspiring writers. Due to its immense success, a sister competition, Illustrators of the Future, was created.

The annual Contests draw entrants from around the globe and are free to enter. Winners retain full rights to their work and each are given cash awards. Grand prize winners receive an additional $5,000. The Contest flies out all winners to Los Angeles for an expense-paid, week-long workshop given by Contest judges and culminates in a black-tie gala awards event.

“View from a Hill”
Scroll to top