This won’t surprise anyone who knows me, or who at least saw my acceptance speech at Writers of the Future 35: My sons are my motivation.

When I was a kid I was always making up stories, always asking What If? about every situation. It was something that stayed with me through my teens and into my twenties. If anyone ever asked, I would have said I was a writer … but then in my late twenties to early thirties I stopped writing.

Simply put, I’d lost the dream. Saddest most insidious thing is I didn’t even realize it until a decade later. You see, I was still telling people I was a writer. There was always some project I was getting ready to start, an idea that would be jotted down for later, or enough editing on that one book I’d written that I could justify—at least internally—the title.

But it was a lie. There was no feverish desire to get the ideas inside my head written down. I was like a Skrull from the Fantastic Four comics, looking the part on the outside only. I was lacking motivation, or even the motivation to look for motivation.

But sometimes in life a seemingly unrelated change comes along to give the nudge that is needed.

When my son, Jack, was born I suddenly found that missing motivation. One screaming, demanding change in life made me question everything else. Would Jack be proud of me in my office job? Would he brag to his friends about me? Would I go in to talk to his class about internal audits and creating health and safety manuals?

Something Had to Change

Something had to change, but what? Then I remembered what I’d been saying all those years: I am a writer. So I began to write again. Slowly. Tentatively. Badly. I was exercising a muscle that had been allowed to atrophy … but that love of What If? was still there, waiting for me to pay attention. There were new topics now, and sometimes scary What If? questions around being a father. It was all fuel for a building fire.

Two and a half years later Jack got a little brother, Oliver, and the fire grew.

I took courses to improve my writing skills, and started showing stories to people. I joined a critiquing group, learning how to take criticism and improve my stories. I discovered that there was an incredible point where a story stopped being mine and would start to belong to the reader.

I started submitting stories to anthologies and magazines, learning to take rejection and realize it wasn’t personal. In time a story sold. Then another. And another. Not at professional payment, but each one brought me closer.

When Writers of the Future accepted my story, “The Damned Voyage,” for the 35th annual anthology, I’d published about thirteen stories, and seen my first novel, The Reluctant Barbarian, in print. I had become a writer in fact, not just inside my head.

But that’s just the beginning of the tale.

I always have a goal in regards to my writing. First sale. First professional sale. First novel. My current goal is to bring my writing income to the point of replacing my day job. I will be a full time writer one day, and soon.

In the meantime my kids go to school and tell their friends I’m a writer. They’ve read some of my stories and seen me putting in the effort for something important to me. I’ve been invited to speak to their classes about the writing process, and maybe even inspired one or two of those students to write their own stories.

My boys think I’m cool … at least for now. One day that cool factor will probably go away, and I’m okay with that. With any luck they’ll still be proud of me.

Speaking from the Heart

When I made my acceptance speech at the Writers of the Future awards I spoke about my kids. Afterwards I was referred to as: that guy who cried. But another thing happened. People remembered my speech. My fellow writers said that my talk touched them and that they would remember it. All I did was speak from the heart.

And that’s where I am today. I speak from my heart. Oh, maybe not everything is emotional and heartfelt in my writing, but I mean the words I say. There’s a message in many of my stories: What a father will do for his children, or how far he can go when one is hurt. The importance of friendship and family, and on standing by those people in your life. Messages of wonder and amazement and magic, because there is more to this world than what we see. The bizarre and unexpected are just around a corner.

I’ve come full circle to that kid I used to be who looked at the world with a question of What If? on every subject.

All I had to do was find my motivation first, and grow the fire. 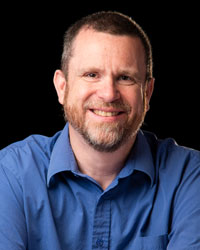 John Haas is a Canadian author living in Ottawa with his two wonderful sons. Since the early days of elementary school, John has been an avid storyteller, though mostly only told those stories to closest friends, family, and the occasional pet. Once the above-mentioned wonderful sons entered his life, the need to write kicked into high gear, fuelled by a desire to be something his boys could be proud of. In the past eight years or so he has had fifteen short stories published in various excellent publications, and seen his first novel, The Reluctant Barbarian, a humorous fantasy tale, and its sequel, The Wayward Spider. Since the sales were made to small presses that don’t pay professional rates, he was still eligible to enter the contest at the time he submitted to Writers of the Future.  John’s goal remains to become a full-time writer (rich and famous would be nice too, but one step at a time).

Some Secrets from the Editor Side of Things