Nearly three years ago, I nabbed my very first editing client, and my self-employment as a freelance developmental editor has been going pretty swell ever since. But as both I and my business have developed, I’ve started to notice some destructive ideas that cost my clients all kinds of money and time that they could better be spending elsewhere. So today I’d like to share some secrets from the editor side of things—and some of the best ways to save your sanity on edits, and get the most bang for your buck.

Most developmental editors offer line editing services, which tend to start at around $0.01 per word at a standard rate (about $100 per 10,000 words). A line edit is where an editor goes line-by-line, making tracked changes to the text, and offering comments on all the things that don’t work (it is not the same as copy editing, which corrects spelling, mechanics, and grammar). This is the fine-toothed comb of editing, and I am hired for it often. But the ugly truth is this: only about one in ten of the clients I’ve line edited were actually at the stage where they needed that service. Here are some reasons for that:

Times when you DO want a line edit:

Although it is every* editor’s goal to see you succeed, any* editor will take your money and do whatever work you select, especially if you insist. So be informed, and know what services are giving you what bang for what buck. For my own clients, I’d say only one in ten clients can learn more from my most expensive service than they can learn from my mid-range one (which I title “Recommended”). Save yourself the money; you’ll have lots to work with, either way.

*I don’t speak for other editors and their service options, but I do operate on good faith that most of them want to do right by their clients, like I do.

This one is simple: don’t write a vampire romance where the girl is human, the vampire is hot, and she tries to withstand his sultry paleness, but ultimately caves to his blood-soaked deliciousness—the end. Does that sound familiar? Of course it does.

You might argue that Twilight had much more going on than this, and you’d be right. But if this is all you have happening, then how are you blowing Twilight out of the water?

So, what does Twilight have that you don’t? The answer is simple: novelty. Twilight told a story that people were hungry for, but that they’d never heard before—a teenage vampire romance. That was its hook: vampires and teenagers. (You can argue that had also been done before, and it had, but none of those things really went mainstream or hit the YA book market or were as accessible. So Twilight also had good timing, good distribution, and accessible writing, which are other things that added to its novelty.)

Every story has meaning to its author. EVERY ONE. But that does not mean it will have meaning to a contest, an agent, a publisher, or an audience. Your book needs to have a hook. This can be anything from something tagline-worthy (boy mistreated all his life finds out he is famous in the wizarding world) down to something more specific (an LGBT main character, a subverted trope, a unique setting, a touchy subject*). Chasing trends is no good either, because they’ll be gone within the year or two it will take for you to get an agent, a book deal, and then on shelves. But you do need something.

Think Pride and Prejudice and Zombies. Half of that book is exactly the same as its source material, and yet it’s a whole new story, and a bestseller. So, don’t knock out a book that’s been done a million times. Brainstorm how you can make it stand out in the field. If someone asks you, “How is your book different?”, you had better have an answer.

An editor can help you fix your concept, but how much of their other feedback is rendered moot once you make that big change? Come to the table with a good concept already; otherwise, they are already being paid to edit a book that is destined to change drastically, or even to fail.

*Take care not to appropriate. Don’t write a hookless book and then “fix” it by making your character gay or your setting Asian, etc. These sorts of things should come from research and be integrated into the story, not tacked on for curb appeal.

#3 Your First Book is Your Tutorial

This one sucks the most when you realize it, but makes the most sense later on. In most cases, the first book you write is your training manual, not your ticket to the big leagues. (And by “first book,” I mean the first book you polish up and send to agents, even if you may have written others before that.)

To be frank, your first book is a complete Dumpster fire, like all first drafts are. But you are probably not yet the writer most capable of sorting that Dumpster fire into anything worth selling. It will be a pile of burning trash no matter how much water and perfume you dump on it. This is a sad fact of the writer’s life. However, there is a huge bright side to this: without turning a terrible first book into a slightly-less-terrible first book, you won’t have a semi-decent second book.

In short, you learn so much from Book One that, even if you pay hundreds to hire an editor for it and still don’t get an agent, the revision pays for itself in the increase to your skill level. (This of course assumes that you are able to take and utilize constructive criticism, and X knows not everyone can.) As an editor, I get a lot of first books. Sometimes I see them more than once. Sometimes they get agents, but most do not. But the best thing I see in my career is a second book from someone who has made use of everything they learned from the first, and applied it to the second. You would not believe some of the vast improvements I have encountered—like night and day. If a writer is determined to improve their craft, then the difference between a person’s first and second book is often astronomical.

Take for example the advice that a character must have agency—that they must make the story happen, rather than having it happen to them. Say you write the main character of Book One to have no agency, because you don’t know better at that time. To fix this, you revise every scene that character is in, trying to give them more agency. The resulting draft is better, but it is still operating under the yoke of the original book, because you have not started from scratch, but have instead worked within your original framework. The skeleton hasn’t changed much, and their agency, though improved, is not optimized. however, you have spent time improving the agency in every scene, to the point the concept is now hammered into you brain.

Then you write another book, and from the very open of that one, you know your character needs to have agency. Every scene thus becomes charged with your character’s decisions, actions, and movement through their story. So therefore, the first draft of Book Two is already as good or better than the revised draft of Book One, and its “skeleton” is already built to hold the character’s agency. This same concept goes for every other thing you learned from Book One—a dozen writing rules optimized, where before they had been forced in.

In conclusion, my advice is to make every book you write the absolute best it can be. But if it does happen to fail, move on. Don’t stay there, don’t cling to it, don’t revise it ten times. You have better books inside you, and the next one will blow your mind. (Besides, Book One isn’t going anywhere. You can always come back and rewrite it!)

Even if you hire an editor, don’t expect them to turn your book into gold. It’s possible that they are instead helping you to turn you into gold*. That gold will then bleed into your future projects. I personally think this is still worth money, but it’s also worth the cheaper option in many cases. You can learn a great deal from a simple beta read from a professional.

*With that—and everything else in this article—said, some editors still suck, and are no good for your book or you. There are many red flags to watch out for (missing deadlines without notice, for example). If you want to be safe, check their experience, testimonials, and accolades. Very low prices can indicate low experience, too. The same goes for agents and publishers. Be informed. And good luck! 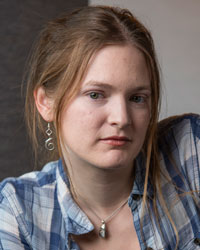 Mica is a freelance developmental editor based near Detroit, Michigan. She started writing stories in kindergarten, opening with a colorful series based on her zoo-animal Duplos (involving, at one point, flying go-carts that ran on … coconuts?). She is also the curator of Free Writing Events, a Twitter account and website which compiles and promotes free-to-enter online writing events and contests to over 20,000 authors (it’s how she discovered Writers of the Future). She writes YA fantasy long-form and adult science fiction short-form, and her current obsessions are home-brewing, Steven Universe, and board games that start with the letter “M.” She is also the founder and host of the #Write4Life charity event, which aims to help other writers get edited and agented. She quit her day job to pursue the dream of writing in 2016, and this is her third professional publication. You can find her services and Free Writing Events calendar at micascottikole.com or on Twitter at @writevent.

You Gotta Work For It

Motivation, What If, and a Growing Fire
Scroll to top